Whatever happened to the missing million?

I was recently sitting in a gynaecologist’s waiting room (monitoring which part of my body will fall apart next is one of the most irritating aspects of ageing). I’d forgotten my phone and the only reading material available due to Covid fearmongering was a lone copy of the St Vincent Clinic Foundation research report.

Flicking through it I discovered this fascinating graph showing the gender split of research grant recipients: 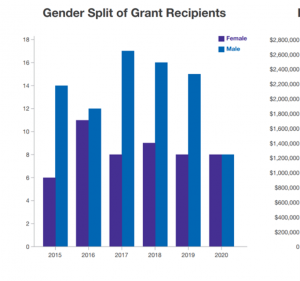 It tells quite a story. Take a good look and you’ll discover male scientists receiving the bulk of the grants right through to 2020 when, miraculously, the males lost $1 million in funding to end up exactly on par with the female researchers.

I sent a series of questions to the Foundation asking how this was possible, given the document states that only the best projects were supported, and gender was not mentioned as a criterion for determining the funding.

Here’s the fatuous response from media director David Faktor – “On behalf of St Vincent’s, I can confirm that the selection of research grant recipients by the St Vincent’s Clinic Scientific Committee is based purely on merit,” he wrote, claiming the shift was simply due to an increase in senior female researchers. Phooey!

What’s alarming is these people see no need to come up with any proper story to cover their shameless social engineering. It’s now a badge of honour to be seen as blatantly promoting women ahead of men.

Take a look at the recent report produced by The Grattan Institute, which claims the Covid crisis had a far more adverse impact on employment of women than men.  Their report was naturally lapped up by much of the media, which revelled in talk of a “pink recession”, claiming women’s economic progress had stalled in the shadow of Covid, that women were more likely to lose their jobs, and working hours than men.

One of my correspondents has done an excellent job exposing the shameful deception of the Institute, revealing their duplicitous distorting of the data and cherry-picking of results, whilst ignoring readily available ABS data which contradicts all their major conclusions. Read his detailed report here.

The key finding from the Institute was at peak Covid in April, almost 8 per cent of Australian women had lost their jobs whilst the figure for men was 4 per cent.

My learned correspondent explains this massaged result was achieved using an apples versus oranges comparison, comparing women at the bottom of the recession to figures for men from an earlier period. The data misleadingly included only employed women not all women and people who resigned jobs as well as those who lost them. It’s a classic example of the point well made in the book, How to lie with Statistics: “If you can’t prove what you want to prove, demonstrate something else and pretend they are the same thing.” That’s just what the Grattan Institute has done.

In fact, all the major claims made by the Institute in this paper are wrong. It is not true that more women than men lost jobs and lost hours of work during this period. The true figures are readily available from ABS data and show it was mostly men not women who lost their jobs in this period: 2.6 % of women lost their job in the quarter ending May 2020 versus 2.9 % of men.

Look at this graph showing change in underemployment, which includes all employed workers who aren’t getting as much work as they would like. It’s very clear that it is mainly men who are missing out on employment. Since November women have been better off in terms of underemployment than they were pre-Covid whereas men are only now back to pre-Covid levels. 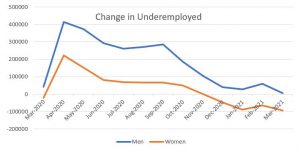 All the details are there in the full report – information readily available to those in the know. But naturally the false narrative promoted by Grattan has rarely been publicly challenged.

I’d welcome more exposés of this sort – it’s wonderful having a growing team of nerds to help throw a few spanners in the relentless feminist machine misrepresenting the true picture of men and women’s lives in this country.