Think back a few years to the royal commission into institutional child sexual abuse. One of the most striking patterns to emerge rarely attracts any public comment. Night after night, adult “survivors” were paraded on news programs, speaking out about the dreadful sexual abuse they had received as children.

Did you notice that by far the majority were male?  In fact 64 per cent of the people reporting child abuse to the Commission were men, according the final report. Funny that this vital fact was not deemed worthy of reporting.

One of the best-known advocates for child sexual abuse survivors was Adelaide social work professor Freda Briggs, who frequently argued that boys need more protection from violence and sexual abuse. This “champion of children,” who died in 2016, was particularly concerned that child protection curriculums habitually portrayed females as the only victims while males are always perpetrators.

The latest edition of South Australia’s school child protection course, Keeping Safe, was dedicated to Freda Briggs. Yet this course, part of the compulsory SA school curriculum from kindergarten through to high school, is built around examples of violent, nasty males abusing innocent females. A few years ago, I was contacted by a teacher, Christopher Vogel, who had just completed a masters thesis analysing the gender of violent perpetrators depicted in this Keeping Safe program.

Christopher found the curriculum contained over 80 examples of violent, aggressive behaviour by men and boys: dangerous, nasty males molesting, groping, forcing girls to have sex and hitting their mothers, images of frightened girls with battered bruised faces, violated bodies. In all this parade of misogynist misery there was only one mild example of a girl misbehaving.

As Christopher pointed out, the kindergarten curriculum is based on story books but here even the featured animals reflected the same bias: “All the stupid and dangerous animals were boys and the smart and brave ones were girls”.

Pretty funny, eh? But not such a joke when you consider the message this sends to little boys being fed this propaganda. They are being systematically taught that our society won’t believe them if they are being abused and that a boy can never be a victim. It just doesn’t happen.

The result is male victims of abuse are silenced. Older folk reading this might remember the community shame that greeted revelations decades ago that child sexual abuse victims feared they wouldn’t be believed if they reached out for help – which was indeed often the case.

Now, in theory, we have set up systems of child protection to ensure victims are believed. But if children through their schooling are exposed to material that explicitly denies males can be victims, we are still teaching boys to keep quiet about their own experiences The message is loud and clear to our boys that  no one will believe them if they talk about what’s happened to them.

This is the real shaming of boys in schools with far more lasting impact than boys in Warrnambool being forced to stand and apologise for women’s violence, or a council social worker attacking boys as “white male oppressors”.

Such isolated incidents are nothing compared to the damage being caused by feminist ideology now part of the school curriculum which is denying the reality of children’s lives, teaching boys to be ashamed of being male and absolving girls of any responsibility for their own behaviour. 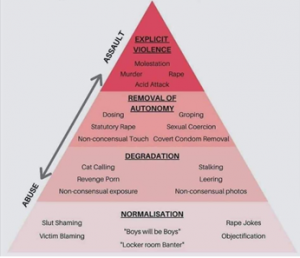 Have a look at this classic piece of feminist propaganda, which is featured in Victoria’s Respectful Relationship school curriculum. Here in all its glory is the familiar thesis that attitudes of grubby, sexist boys ultimately lead to rape and murder of women.

That’s the fallacy that underpins the government’s respect for women television campaigns – who could forget that horrid little boy slamming the door in the girl’s face? It’s the dangerous falsehood now entrenched in government policies and in school curriculums across the country.

Years ago, the former senator David Leyonhjelm grilled bureaucrats in Senate Estimates demanding evidence for the assumption underpinning that television campaign that domestic violence stems from sexist attitudes. After months of stalling the public servants fronted up with a few international studies from WHO and similar agencies which show a connection between misogyny and rates of violence in deeply misogynist countries like Saudi Arabia and Afghanistan but no such link in egalitarian countries like Australia. Leyonhjelm snookered the bureaucrats but the media took no notice and the feminist juggernaut rolled on.

Think about what it is like for children in our schools to be lied to about this complex social problem. They are being fed all the usual feminist poppycock about domestic violence being all about sexism, male power and privilege and not one word about violent, abusive women. They are given no information about the real risk factors – which are not little boys behaving badly but rather mental illness, drug and alcohol abuse, poverty, and exposure to parental violence.

The child’s home leads to the cycle of violence

It’s the issue of parental violence that is the real worry. The truth is that for every child sitting in a school room who has been damaged by living with a violent father there’s one who is growing up afraid of her mother. In our campaign launch I mention the Australian Institute of Criminology study, now over 20 years old, which found precisely that – 23.4% had witnessed their father’s violence against their mothers but with 22.1% it was the other way around. The amusing and revealing twist to this story was the author totally ignored this startling result and only wrote about  father’s violence.

Yet with this inconvenient truth emerging you can understand why there’s been no further research pursuing children’s experiences of violence. The feminists have absolutely no interest in exposing the two-way violence which is the norm in most violent homes. (By the way, if you want more explanation of the complex DV statistics, look at my definitive 2016 article here  – or go to oneinthree.com.au for more recent data.)

The result is all those little children with violent mothers are also being silenced in our schools. How could they tell anyone they are being abused when we are making it very clear that we don’t want to know?

That’s why the Mothers of Sons campaign to stop boy shaming in schools really matters. What’s being taught in schools is so damaging to upcoming generations of children. It’s not just the impact on boys but also there’s no attempt to encourage girls to take responsibility for their own behaviour. Do we really want to send the message to our girls that women can get away with being abusive and dangerous and society will turn a blind eye?

Just look at the dreadful shaming of boys which took place after Sydney school girl Chanel Contos launched her campaign calling for allegations of sexual misbehaviour in schools. This resulted in countless girls telling tales of boys taking advantage of them when they were too drunk to know what they were doing. Now there’s the big push for consent courses to be included in school curriculum, where girls will be taught that they can’t give consent if they are drinking – yet drunk males are always responsible for their actions. These courses encourage girls to feel free to withdraw consent at any time, even after the event. Talk about the perfect recipe for creating fear and distrust between the sexes.

We really must step up and stop this happening. Go to the Mothers of Sons website and see how you can contribute to this important campaign.