Over the last few years Australian universities have been bullied into establishing kangaroo courts to investigate and adjudicate sexual assault. This followed a long campaign by feminist activists claiming there was a “rape crisis” on our campuses, following a similar campaign in the USA which led to the Obama administration requiring all publicly-funded universities to set up tribunals to determine such matters.

What’s behind the feminist’s scare campaign?

What really concerns Bettina is the motive behind the activists’ campaign. These feminists are unhappy about the fact that juries rarely convict in “he-said, she-said” date rape cases when they don’t know whom to believe. Their aim is to get more rape convictions by persuading universities to get involved in adjudicating sexual assault cases using lower standards of proof and by failing to offer the accused normal legal protections – as has happened in America.

In the US, Joe Biden was one of the key players in this move. At the time the tribunals he openly declared he was using the campuses for social engineering of feminist policies. “We need a fundamental change in our culture. And the quickest way to change culture is to change it on the campuses of America,” he said.

In Australia, the activists persuaded our university regulator, TEQSA, to lean on the universities to take similar action. TEQSA issued a Guidance Note which told the universities that they needed to handle these matters and across the country regulations were introduced for determining these criminal cases using an appallingly biased system using the lowest level of proof, the “balance of probabilities”, and totally failing to protect the legal rights of the accused. 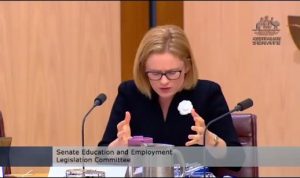 Late in 2019 Queensland Senator Amanda Stoker used Senate Estimates to grill TEQSA bureaucrats about the role of that organisation in encouraging universities to move in this direction. Watch how they squirm here.

For more background on this whole issue, here’s an article Bettina wrote that same year for the online journal Quillette, explaining the recent developments. And an earlier Quillette article where she discusses the manufactured campus rape crisis which was used to bully universities into getting involved in this territory. Here’s a longer version she wrote for Quadrant magazine. 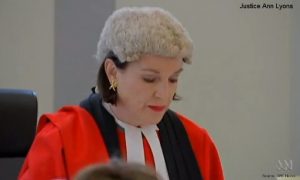 In November 2019, Justice Ann Lyons made a judgement in a pivotal case involving a University of Queensland medical student who was accused of sexual assault by another student.

Wendy Mulcahy, the lawyer for the accused student, took the matter to the Supreme Court arguing that UQ did not have the jurisdiction to adjudicate such matters. Justice Lyons concluded universities are only entitled to make decisions in sexual assault cases which have been proved in criminal court. You can read the judgement here.

The University of Queensland then appealed that decision and in October 2020 the Court of Appeal in Queensland overruled Lyon’s reasoning that it is not appropriate for universities to deal with criminal matters. The appeal judges concluded that it’s fine for universities to investigate and make decisions about sexual assault and impose their own sanctions on these students. Read more about this judgement here.

Bettina is currently working with a team of lawyers who are determined to ensure proper justice for men accused of such crimes on Australian campuses. Her large group of supporters has written to universities across the country and to their governing boards and well as members of parliament protesting this usurping of criminal justice. Contact Bettina if you would like to help with her various campaigns.

Further action is planned to draw attention to the lack of legitimacy of these kangaroo courts and the risks they pose for young men on our campuses.

Bettina’s first involvement in these cases began two years ago when she was approached to help an Adelaide PhD student facing investigation by an Adelaide University committee over a fake rape accusation. Watch how she managed to ward off that committee.

Since then she has been involved in a string of similar stories, bringing in lawyers to help young men in these circumstances. Here’s another example. It’s truly alarming watching these unnamed bureaucrats who feel entitled to suspend students from colleges and withhold their degrees, with no proper authority. 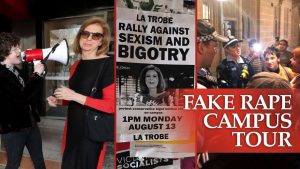 To draw public attention to what was happening here, Bettina started to write and speak out about the whole manufactured rape crisis campaign and the resulting kangaroo courts.

She was the only journalist in mainstream media to point out that the 2017 Human Rights Commission survey which set out to find evidence for the “rape crisis” revealed remarkably good news about our campuses, with only tiny numbers of students reporting sexual assault, even when that was defined in the broadest possible terms i.e. including a stranger touching a student on a train to the university.

The NSW Bureau of Crime Statistics has shown universities are 100 times safer for young women than the rest of the community.

In 2018 –19 Bettina toured the country, speaking to student groups at universities across Australia, seeking to promote honest discussion about this issue and expose the reasons why activists are promoting such untruths about student safety.

Here is her video outlining the major events which happened on her tour.

Her first campus talk took place at La Trobe University in September 2018, after initially being banned by university administrators who claimed it clashed with the values of the university. After some negotiation, the university revised their decision and event went ahead, despite noisy protesters doing their best to drown out Bettina’s talk. 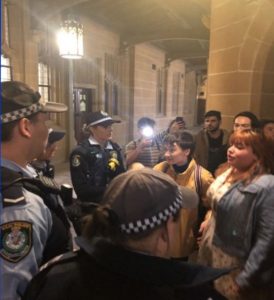 At her second talk, at the University of Sydney, demonstrators took things to a different level. The student group which sponsored her talk were required to pay nearly $500 for  security guards to obtain a venue and then these guards were overwhelmed by unruly protesters who blocked the corridor leading to the venue preventing most of the audience from attending the event. Members of the audience were threatened, physically jostled, some even flung against walls by the aggressive crowd prior to the riot squad being called in by security to control the protesters before Bettina’s talk could go ahead. 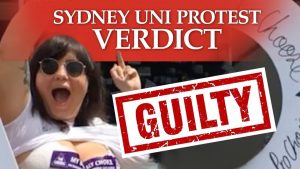 Following 8 months of investigation, the University finally took disciplinary action against the key organiser of the protest – Maddy Ward. See the video announcing this decision.

Soon after the Sydney protest, the Federal Government set up an inquiry into free speech at our campuses. The French inquiry recommended a voluntary code of conduct to promote free speech and Education Minister Dan Tehan urged universities to come on board. But after many of the universities showed only token compliance, the government took action this year to introduce a compulsory code.

Bettina welcomes more volunteers to help with various activities she has planned to draw public attention to what is happening on our campuses. Please write to her here if you would like to come on board. Lawyers are particularly welcome to join our Campus Justice group working for change in this area and supporting students being pursued by university misconduct committees.

You might also like to support the crowd-funder which initially was used to raise money for Bettina’s travel during her tour. Now it’s being used to cover costs involved in providing support for accused students and planning and promoting future campaigns. Bettina is delighted by the widespread support she is now receiving from people all over Australia who are concerned about this issue.