Wake up, people. I know most of you have had a gutful of watching zealots impose mob rule on our society but now is not the time to tune out. This is happening on our watch and we must find ways to stop it.

What we have just witnessed this week in Canberra was not just a shameful feeding frenzy by a partisan media determined to take out Attorney General Christian Porter and hence the Federal government. This is simply the latest round in an ongoing campaign to discredit our justice system and establish an alternate system designed to find more accused men guilty in sexual assault cases.

For years now, activists have been working hard to undermine the authority of our justice system by alleging rape victims don’t receive fair treatment, that rape is rarely reported, and wrongly asserting that convictions are rare in such cases. They prepared the ground and now have decided it’s time to declare their hand.

“The gloves are coming off,” proudly announced Michael Bradley from Marque lawyers this week, declaring an end to the victimisation and silencing of women.

Bradley’s greasy paws are all over this campaign. Bradley was the lawyer who supported the alleged victim in Christian Porter’s case when she was preparing to go to the police. He popped up again representing Brittany Higgins this week following Defence Minister Linda Reynold’s intemperate remark dismissing Higgins as a “lying cow,” when speaking to her clearly less-than-loyal staff.

Michael Bradley and his feminist crew at Marque Lawyers provided legal support for End Rape on Campus activist Nina Funnell’s Let her Speak campaign, which gave Grace Tame the platform that led her to become Australian of the Year. And for years now Bradley has played a critical role in trying to silence me, including sending defamation threats to media outlets where I defended myself during Funnell’s attempts to cancel me.

This is the lawyer who has provided pro bono advice to the activists who have succeeded in setting up our campus kangaroo courts. He was the main legal player behind the establishment of this quasi-judicial system which has usurped criminal law, a system of secretive independent investigations making decisions behind closed doors, disrupting the education and ruining the lives of accused male students across the country.

What a surprise to find Bradley now out there declaring that the police and the criminal courts can’t offer justice to rape victims and calling for an independent inquiry into the Christian Porter case. Just listen to him here – as he spells out the advantage of this new system. What he proposes is an independent system, taking evidence far from public scrutiny and messy due process rules. And its crowning glory? It would use a lower standard of proof, just like the campus kangaroo courts – the “balance of probabilities”. Much easier to nail the guy that way.

Independent inquiries suddenly all the rage

That’s been the overarching theme right from the start of this latest episode in the Year of the Rape Victim. The protagonists must have been disappointed at the short run of the Higgins affair which fizzled out remarkably quickly, despite the best efforts of feminist commentators to maintain the rage.

So, our ABC, leapt into action leaking news of the upcoming 4 Corners Program based on comments from friends of a deceased alleged victim of a historical rape by a Cabinet Minister. Then came Samantha Maiden, political editor of news.com.au, whose tweet framed the debate that would follow, claiming the friends sought an urgent investigation “like High Courts on Dyson Heydon.” (Of course, this actually means a one-sided investigation where the accused never gave evidence.)

That’s it – the game plan was exposed. No matter that the police then announced the case was closed since there was not enough admissible evidence. And that the alleged victim had withdrawn her initial complaint before she tragically suicided. And that her poor parents had not wanted her to proceed with the complaint, warning their daughter suffered mental illness and expressing concern she might have “confected or embellished” the allegations. And that her accusations against Porter emerged after recovered memory therapy, including hypnotic techniques subject to evidentiary restrictions in Australian courts because of their potential to affect memory.

The politicians and media who took up the charge had no interest in any of that, downplaying these inconvenient facts in their media barrage against Porter and anyone who supported him.

They stuck to the script, calling for a better way of dealing with these cases – an independent inquiry. How frightening to see Kristine Kenneally, the Shadow Minister for Home Affairs responsible for the Federal Police, suggesting we need an inquiry to determine whether Porter was a “fit and proper person to be at the Cabinet table”.  And Pauline Wright, past President of the Law Council of Australia,  arguing an independent inquiry would give Christian Porter the opportunity to clear his name. And look at this hogwash from a law professor. 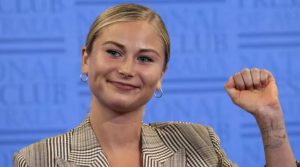 What great timing that Grace Tame happened to be speaking to the Press Club on the same day as the media attack on Porter. Even commentators prepared to speak the truth about the Porter mob attack were able to virtue-signal by praising her bravery and showing their support for rape victims.

We saw Paul Murray on Sky News waxing lyrical with praise for Tame as a “really special lady” prior to presenting this excellent summary of the mob attack on Porter. But there was one glaring note in his analysis – this appalling comment about men convicted of sexual assault. “If you are someone who commits sexual assault, you deserve to go to goal and I hope when they slam the door they break your arm on the way through.”

Really, Paul? But what if that rapist was an 18 year-old boy? The son of one of your friends, a relative, perhaps. Falsely accused of assault after a drunken encounter with a girl who made up a rape accusation after being caught out cheating on her boyfriend.

That’s exactly what happened to a Queensland woman’s son who is featured on the new Mothers of Sons website. She uses the name “Erin” to protect her son who is still shattered years after being acquitted of rape charges after his accuser was found to have DNA from two other men inside her vagina on the night in question, but none from Erin’s son.

This mother is irate that police refused to charge the accuser with perjury, telling her they are under orders not to act on false allegations because it might deter genuine rape victims coming forward. That’s why Bradley and his mob can boast about the low incidence of false rape accusations. It is police policy to keep those numbers down.

The shameful truth about independent inquiries.

It is maddening watching this campaign succeeding in convincing our community that the courts are still biased against rape victims while knowing the struggle families of accused young men now have to receive fair treatment. Believe-the-victim justice already has an incredible grip on our justice system, with even the most dubious cases being pushed through to court – which luckily still sometimes get tossed out since sensible juries won’t send young men to prison when the evidence just doesn’t stack up.

Like the case I’ve been following where a policewoman commented that it didn’t look good that the accused was changing her story so many times. There’ve been other cases where witnesses are not interviewed, and evidence suppressed that could have helped the accused young men. There have been young women too drunk to know what they are doing who cry rape when caught out by friends in embarrassing situations. One such student told friends their activities had been consensual when caught half-naked with another student but after pressure from a feminist ‘rape survivor’ she suddenly changed her story and charged him with sexual assault.

With my group of lawyers, I am dealing with a steady stream of these cases where accused male students are receiving appalling treatment from “independent inquiries” – which suspend their degrees, throwing them out of colleges, preventing them from finishing their courses and derailing their careers. A Sydney University official told one of the accused students she’s dealing with dozens of these cases every year.

So, take note, everybody. Look at our universities. That’s the future for all men accused of rape in Australia, unless we all stand up now.

Get your heads out of the sand and get active

As Peta Credlin says, this is not just a fight for the likes of Christian Porter. It is our fight too.

What to do? Well for a start we need to support the Prime Minister and everyone else who is standing up against the mob and resisting calls for this proposed dangerous new tier of our justice system.

Credlin suggests Labor believes this campaign will win women’s votes but rightly points out that most ordinary people have men in their lives they care about and don’t want them accused in a system which denies them proper protection.

The Mothers of Sons group has responded by posting draft letters on their website that people can use to write offering support to the PM and Christian Porter, and to MPs voicing concern about the current push. Anyone can use these letters, also as drafts to key media commentors, editors, anyone joining this dangerous campaign. 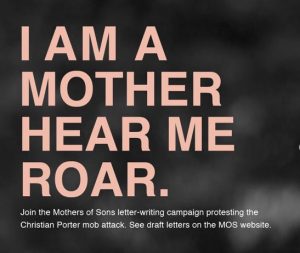 And please write to support school principals who are being pounded for making sensible suggestions about consent and risk-taking behaviours including the impact of alcohol.

That’s only the beginning. We need to bring together powerful voices to take on this attempt at mob rule. There must be hundreds of retired lawyers and judges out there who shudder at where all this is heading. Please contact me and let’s see how we can derail this juggernaut. We owe it to the generations of young men who will face an even tougher world if we let this happen.