The never-ending pursuit of one-eyed justice

Last month the NSW Law Reform Commission released recommendations for reform of the state’s sexual consent laws, after a review lasting over two years. There was an immediate outcry from feminists complaining that the state had missed their chance to require ‘yes means yes’ consent when defending sexual assault allegations.

The activists have been pushing the case for “enthusiastic” or “affirmative consent” to be enshrined in these laws, mimicking Tasmanian legislation which requires the accused to actively check out whether they have consent, not just at the start of sexual activity but throughout the process.

Despite massive lobbying from women’s groups, the Commission decided not to go this far, although they recommend that it’s not enough to assume consent simply because your partner does not verbally or physically resist – in recognition of the fact that victims can “freeze” during an assault.

There’s a bunch of other recommendations which further strengthen the rights of complainants, including the notion that consent is impossible if the person is “so affected by alcohol as to be incapable of consent” – a very problematic definition particular as intoxication of the accused is not deemed a relevant defense.

But what the most alarming aspect of media coverage of the Commission’s announcements was the reported comment by the very woke NSW Attorney General Mark Speakman who, when he tabled the report in parliament, suggested the “low conviction rates’ for sexual assault compared to other offences may contribute to the reluctant of victims to come forward.

Compared to which offences, Mr Speakman? The conviction rates for sexual assault are high compared to many other serious crimes which attract long prison sentences. The latest NSW Bureau of Crime Statistics (BOSCAR) statistics show a conviction rate of 57 % for proven sexual assault, compared to 33 % for murder or 36 % for attempted murder. Sure, there are lesser crimes, like stealing a car, with higher rates (73%) but these are often easier to prove than the he-said, she-said evidence that comprise most sexual assault cases, particularly in date rape situations.

Sensible juries are not going to send men away for long prison sentences when they are faced with contradictory evidence and cannot work out whom to believe. Nor should they. This is nothing to do with prejudice against rape victims, as explained in a recent article from spiked-online, quoting research surveying jurists by Professor Cheryl Thomas, director of the Judicial Institute at University College London. Thomas dismisses misconceptions about “low” conviction rapes for rape cases pointing out that the current UK rate (68.5) is the highest on record.

In Australia the numbers of such cases are also way up. BOSCAR data shows a huge increase in rape convictions, which almost doubled between 1995 and 2020, up from 579 to 1006 – a 14% increase in conviction rates. 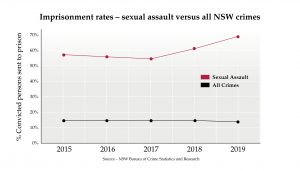 In the last five year there been a 72 % increase in people sentenced to prison for sexual assault. Here’s BOSAR’s neat little summary of this very significant change.

Speakman’s posturing doesn’t surprise me – after all this is the man who so readily parroted the lies being circulated about me when he urged my honours award be rescinded.

But it is concerning that the state’s senior legal officer chooses to fudge crime statistics, particularly when this man could influence the feeble NSW coalition government to bend to the feminist push and take things even further. Some of my long-time readers might remember when law professor Augusto Zimmermann led the WA Law Reform Commission which mounted a strong argument against proposed domestic violence laws, only to have the government ignore their advice and push ahead with policies which set up men for endless false accusations.

So, I need you to write to key conservative members of the NSW Cabinet, such as Barilaro, Perrottet and Elliot, urging them to rein in Speakman, and ensure minimal changes to the already tough sexual assault laws. We only have ourselves to blame if we sit back and allow Speakman and his feminist fan club to make the running.

PrevPreviousUniversity regulator grilled over role in setting up kangaroo courts
NextViolent women are mad but violent men bad. Next