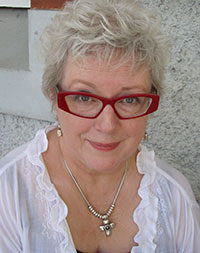 As a busy career woman in my forties, I gradually became aware of an increasingly intense itch and crawling sensation in my vulva, so bad that it woke me at night. I went to my GP who couldn’t see anything wrong initially and prescribed an anti-fungal ointment just in case it was thrush. This had no effect (because I did not actually have thrush!) and so she referred me to a gynaecologist. He also could not see what was wrong and prescribed some other ointments, none of which helped. I continued to suffer the terrible itch over the next four years, and my GP finally sent me to a dermatologist who took a biopsy and diagnosed lichen sclerosis. By this time I had lost a significant amount of my inner labia, something which might have been retained had I been diagnosed correctly and promptly. The prescribed treatment was prednisolone (steroid) ointment, and this successfully reduced the itch for a while, but without removing it completely.

As the years passed my condition started to deteriorate and the prednisolone became ineffective. I also discovered a peri-anal lump which proved positive on biopsy, and had a squamous cell carcinoma excised – this was completely successful and the cancer did not return. In frustration with the lack of knowledge and care about LS within the general medical community, I took myself to the Melbourne Sexual Health Clinic in Carlton, and met a wonderful specialist in vulval conditions. She was very knowledgeable and compassionate and I had regular appointments with her there. Because waiting for hours in a drop-in clinic was not an option for me career-wise, she transferred me to the Vulval Clinic at the Mercy Hospital in Heidelberg, Victoria, and I have been an out- patient there since 2006.

My treatment regime became more intense as the condition worsened. Every case is individual, and some women are lucky enough to be easily controlled with steroid ointments. I am not one of them!

Over the last few years I have been using clobetasol, the strongest steroid available, and even this has failed to halt the inexorable progress of my disease. For instance, I have had “flares” every time I travelled or went on holiday, particularly if I was in a hot climate like Noosa or Mexico. A flare usually involves both open lesions and an unbearable crawling sensation as though a swarm of fire ants was on the rampage. Whilst others are enjoying the beach, I have had to carry anaesthetic ointment and live in horror of needing to pee as this is excruciating during a flare.

In an effort to resolve all my health issues, I had 2 cataract operations, a shoulder reconstruction and a hip replacement over a 12 month period. I am healthy and strong, and I always heal quickly and bounce back after surgery. However, my LS became so feral during this time that I had monthly appointments at the clinic where the ever-changing medical team monitored my painfully fragile and screaming vulva. As my skin could no longer tolerate the steroid ointment, the specialists tried me on two oral treatments (first Plaquenil and then Methotrexate, a chemotherapy drug) to see if they might work, but unfortunately there was no change whatsoever.

I developed an open sore between my clitoris and urethra, and finally I asked the team to biopsy the area. I had three cone biopsies under local anaesthetic (the horror, the horror!) and was sent home with no pain meds. As the local wore off that evening, I was in such screaming agony that I took some left-over Endone (morphine) from my hip surgery and basically had to continue taking that to function. Applying the anaesthetic ointment prior to having a pee was another very special stinging horror, and the numbing effect lasts only two minutes. I have been told that my localised intense pain was due to constant irritation of the nerves concentrated in this area as the cancer developed.

No one got back to me about the biopsy results and I called to be told that the open lesion was a SCC and that I would be referred to the Mercy’s oncology unit. Being a stroppy and questioning patient, I subsequently researched specialists in this area and found that the head of gynaecological oncology at the Mercy was a highly recommended surgeon and went to see him the following week. At last, I found someone who was both knowledgeable and empathetic.

The surgeon examined me and told me that he would have to do a radical vulvectomy to remove all the affected skin, and have it biopsied to make sure that the cancer was completely excised. He also warned me that I might have to have follow-up treatment including radiotherapy and chemotherapy if the cells had spread, but said that I would at least be pain-free. I prepared myself for the worst case scenario….not a happy few weeks in which to attend to my extremely stressful professional life.

I had the surgery on Tuesday November 20, 2012, and woke to find that I had had my whole vulva excised from the clitoral hood to the perianal area. The procedure was challenging because of the proximity to the urethra. I was catheterised for three days to ensure that the urethra would be functional as the swelling reduced, and fortunately I had no problems once it was removed. My body has bounced back as usual, and I am recovering well. However, let me tell you that this procedure is not for the fainthearted!

I am so lucky. Biopsy results showed that the excision was totally successful and had clear margins – this means that it is very unlikely to recur. However, I still have lichen sclerosis, and I will need to monitor and treat this as long as I live. I am also traumatised and emotional, and very angry at the lack of treatment options or research.

I have worked in medical research communications since 2006, and part of my work involves writing funding submissions in which I translate highly technical material for a lay audience. I started to research lichen sclerosis, and also became involved with an internet-based support group started by a wonderful English woman. What I found was that there is barely any research done on this particular condition, and on other serious and uncomfortable vulval problems. I also found that there was an aura of secrecy, confidentiality and….well, shame….about anything to do with the vulva. Because I know that research depends on funding, and funding depends on awareness, this was intolerable to me.

LS is thought to be an auto-immune related condition affecting the collagen cells under the skin which become dysregulated. Although it can be found on other areas of the body, it seems to localise mostly on the vulva where skin becomes either tissue thin and fragile or white and thickened – in my case I had both together. Babies can be born with it and men can also develop it, but much more rarely. It is often associated with other auto-immune conditions, and is also connected with stress. To my knowledge, I am the only one in my family suffering from LS.

I want to raise awareness of gynaecological health and get rid of the “yuck factor” that both women and men seem to have about women’s genitalia. It is a shameful fact that Grey’s Anatomy – a publication hundreds of years old – has only in the last 10 years amended its description of the female genitals due to a previous lack of interest or research. No wonder there is even today so little understanding of “things that go wrong down there”!

As 11% of women worldwide will be diagnosed with LS (let alone all the other painful vulval and vaginal conditions) in their lifetime, we desperately need new treatments to reduce the symptoms and possibly find a cure. We have a responsibility to our daughters and granddaughters to work together and make sure that this happens.