No one cares about boys doing badly

No one cares about boys doing badly

Nearly forty years ago I was interviewing a senior NSW bureaucrat about how badly boys were doing in schools. “What do we do if we find girls continue to draw ahead of boys?” I asked her. “We wait 2000 years and continue to analyse the results very, very carefully,” said this Director of Curriculum.

She later claimed that was a joke but that has precisely been the strategy of feminists running our education system since that time. This was in the mid 1990’s and they’ve been sitting pretty ever since the 1972 Whitlam government introduced strategies to encourage girls’ achievement in schools. Girls were surging ahead across the board.

But the endless promotion of girls’ achievement threatened to come unstuck when suddenly parents started to notice what was happening to the boys. Robert MacCann from the NSW Board of Studies released a startling report giving a very detailed analysis of sex differences in final school results which showed girls doing increasingly well and boys’ results dropping through the floor.

Look at his graph showing what had happened in the previous decade: 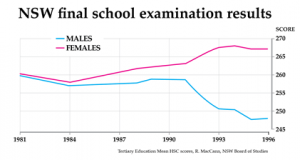 Suddenly the newspapers were full of stories of irate parents demanding to know what was going on. Parents sent me cuttings from local newspapers showing the smiling faces of girls winning all the prizes in school speech days whilst boys filled the remedial classes or dropped out of school.

It was obvious that girls’ education strategies had more than levelled the playing field. But that wasn’t the main game for the feminists now firmly entrenched in our education departments. A letter I received in response to my articles on boys’ education spelt out the feminist goals very clearly.

“Girls today are far beyond needing equality. They need compensation for two thousand years of being repressed, mutilated, enslaved, raped and treated as inferior,” the hostile reader wrote.

Similar sentiments, more tactfully expressed, were published in an article “But the Girls Are Doing Brilliantly,” in a gender equity magazine produced by the Federal education department.  It suggested that increasing girls’ performance in maths and science wouldn’t provide girls with a passport to career success, nor result in better paying jobs or increased workforce participation. More had to be done.

This mob wasn’t at all happy when governments responded to the massive community disquiet about the boys being left behind with two parliamentary inquiries. The first, led by Liberal backbencher Stephen O’Doherty in NSW made worthy recommendations only to have the project shelved when Bob Carr’s Labor government came to power, kowtowed to the Teacher’s Union and buried the whole thing.

Next came the Howard Government’s House of Representatives Inquiry which reported in 2002 after receiving a record number of submissions. The bipartisan committee unanimously recommended programs to assist boys, especially in literacy. The Deputy Chair, Labor MP Rod Sawford, spoke out about the “state of denial” the committee encountered in education bureaucrats and academics, which they put down to “the fear that addressing boys’ issues would undermine ongoing support for strategies for girls”.

Federal Education Minister Brendon Nelson announced he planned to tackle this head on, with his government considering to what extent pro-girl policies were “letting down boys and their families.” He announced boys’ “Lighthouse” programs to fund schools developing strategies to improve boys’ achievement.

But naturally Labor’s powerful handbag brigade weren’t having a bar of this and funding for boys’ initiatives rapidly dried up when the Coalition lost power. (Every time I despair of Morrison’s pathetic Coalition government I think of this history – Labor has ruthlessly dismantled programs benefitting men and boys in family law, support for fathers, etc)

This was just when Christina Hoff Sommers was exposing the plight of boys’ education in America in her powerful book, The War Against Boys. Similar patterns were to emerge in many Western countries – “Worldwide, boys are 50 percent less likely than girls to meet basic proficiency in reading, math and science,” notes Warren Farrell.

Here we are twenty years later – with boys’ education totally off the agenda. The 2019 Alice Springs Education Declaration setting out Australia’s current goals for education didn’t mention “boys” in their entire document.

Most of the data showing how badly boys are slipping behind never sees the light of day. Evidence that is available reveals a dire picture of boys in trouble: 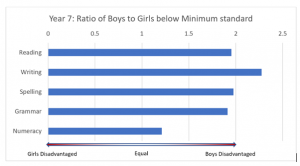 Over the past two decades we have seen more and more measures introduced which favour girls’ achievement. The inclusion of a compulsory unit of English in the calculation of NSW tertiary entrance marks in 1994 was a major factor contributing to the increasing domination of girls at that time. Seven years later, the bureaucrats doubled the compulsory English requirement, which experts calculated immediately tilted by 4% the ratio of girls in the top 10%.

Bias against boys is now worn as a badge of honour. Look at this Melbourne University academic presenting her research showing boys do better in multi-choice maths exams – which she proudly declares is reason to do away with them.

There’s long been a shift to assessment methods which favour girls, like ongoing assessment rather than exams. The currently favoured open-ended inquiry approach and self-directed learning means boys are more easily distracted and can fall behind. Boys do better in orderly classrooms where there are clear directions, explicit goals, timely feedback and consistent sanctions for uncompleted work. They require high expectations and praise to stay on task and achieve good work – yet teachers praise boys less than girls. With male teachers now outnumbered 2.8 to 1, female teachers’ bias against boys is a major issue. Female teachers are more likely to mark boys down, as this OECD study found.

There’s plenty that could be done to facilitate boys’ learning, including a greater emphasis on literacy and reading – starting with a phonics-based reading model. And regular breaks from sitting still. My older son spent time in a school in Manhattan where the boys had scheduled runs up and down the stairs of their high-rise building every hour or two – orderly chaos but great for their learning.

In his latest book, The Boy Crisis, Warren Farrell makes this chilling point. “For the first time in American history, our sons will have less education than their dads.” Farrell explained he grew up in an era in which girls were doing badly in maths and science but “we concluded the trouble was with the schools.” His country decided to tackle the problem and girls are now thriving.

Now boys are doing badly in almost every subject. And what’s the reaction? “We say the trouble is with the boys,” says Farrell.

It’s that darned toxic masculinity. That’s the problem. Our entire education system, with unrestrained glee, now has that firmly in their sights.